Factorio is in a state that even though is not yet finished, it is very close to its 1.0 version. That means that most of the work is done and we are polishing the game in order to make it bright. That's what we've been doing for the past 2 weeks. Literally making it bright.

Since years I wanted to do this post-production work. But I didn't dare to do it until most of the graphics were finished. I was afraid of breaking the consistency of the look and our production pipeline.
Now it's different. There's only a couple of entities to re-design and some other stuff to do, but in general this missing details are not affecting the possibility of working in the post-production.

Factorio is a dark game. I mean conceptually. All these things about industrializing a planet, polluting an entire world just for the sake of the factory, and killing all its inhabitants are not precisely happy concepts full of light. This old article could explain better my thoughts regarding this concept. But the look of the game was dark, too dark. So we cleaned it up without betraying its spirit. Like restoring an old painting. 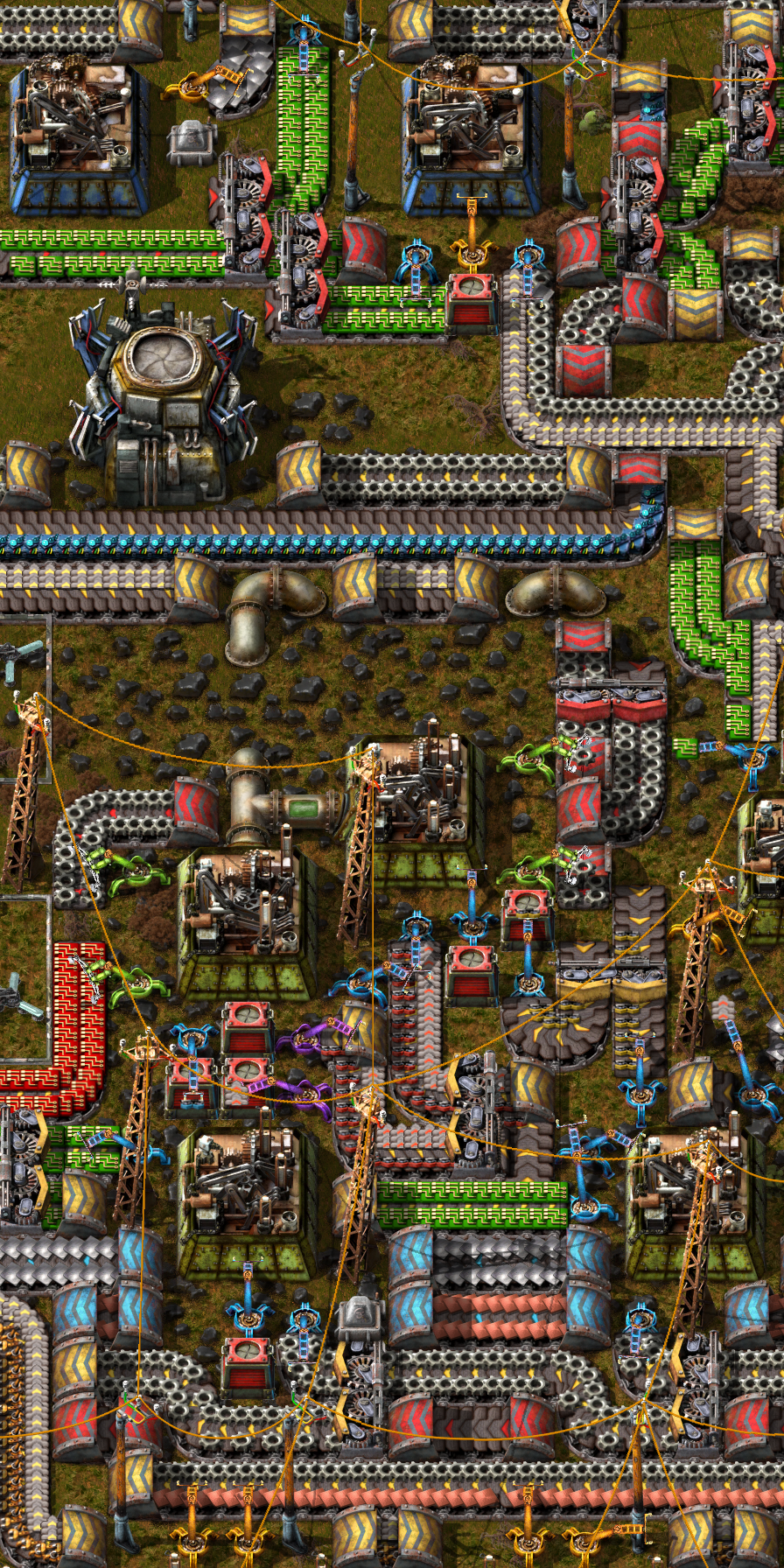 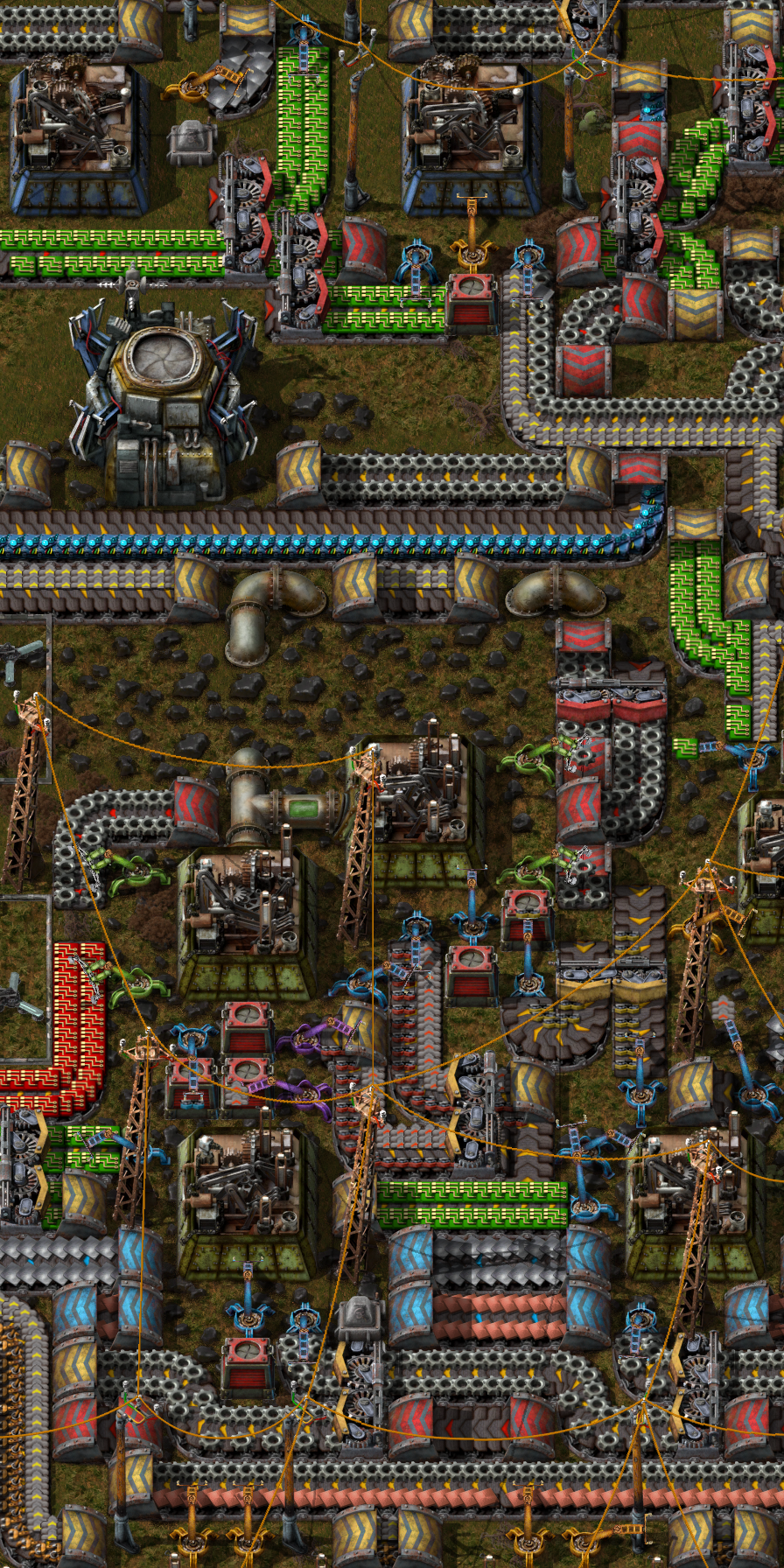 The difference can be subtle, but very effective. We added more light, and a little bit of color saturation. Adding these general changes to the entire sprites collection is not an easy task. Many sprites were badly affected by this general correction. V453000 was fixing individually the broken sprites and icons in order to keep the consistency with the new context.

We took the chance to work on the terrain a bit further. Not only this color correction was applied, but the contrast and integration with other terrains was also improved. Also experimenting with the color of the trees, trying to achieve a more colorful feeling with the excuse of an alien planet. I have to say the Alien Biomes mod was opening my mind - a little - to experiment with the color a bit further. 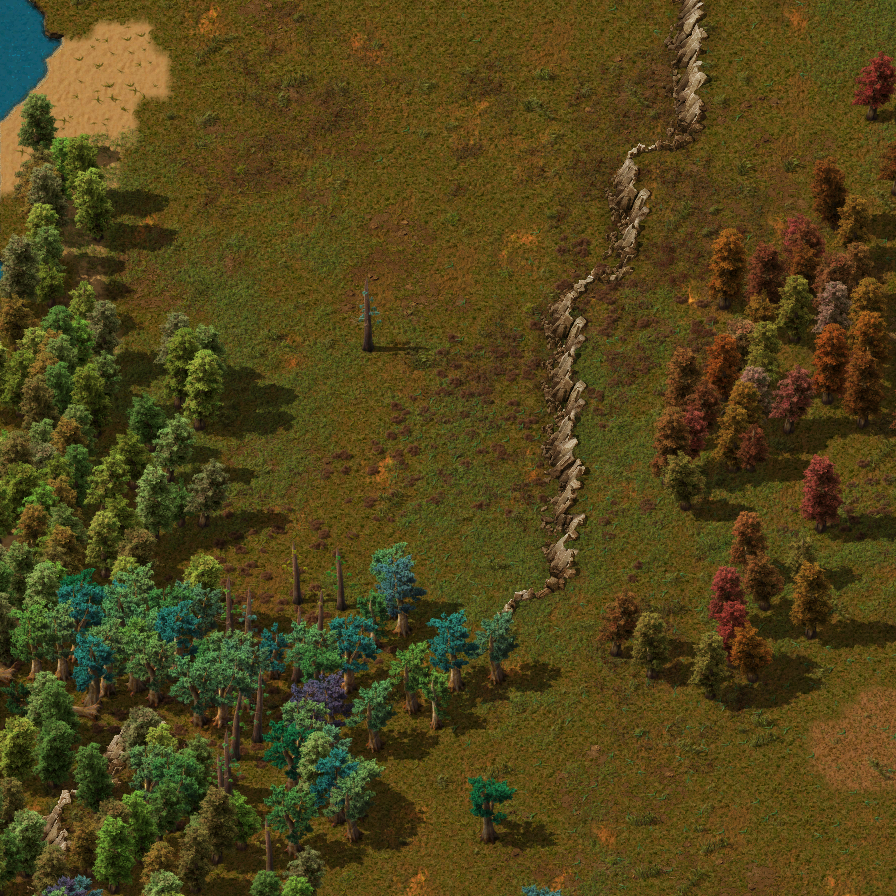 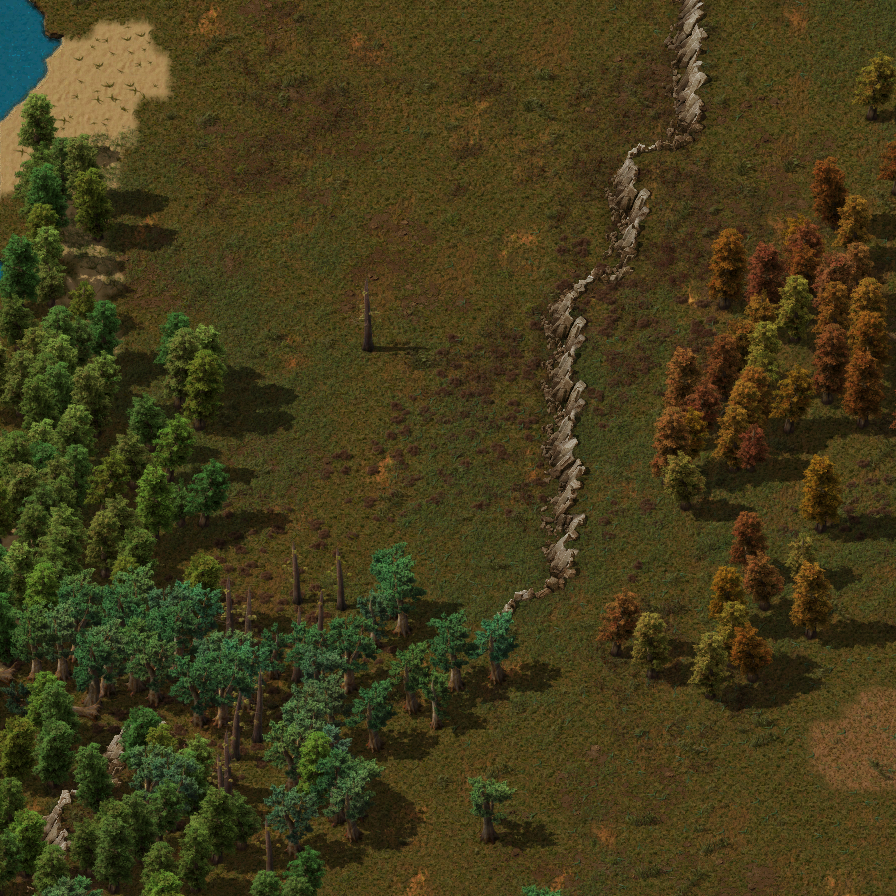 In order to break this general brown feeling, we added a more orange tonality to the sand biome. Here is where you can see the difference more. Going further to too saturated colors is dangerous, after all, the terrain is a background that should provide a good and comfortable contrast with the entities and the icons. 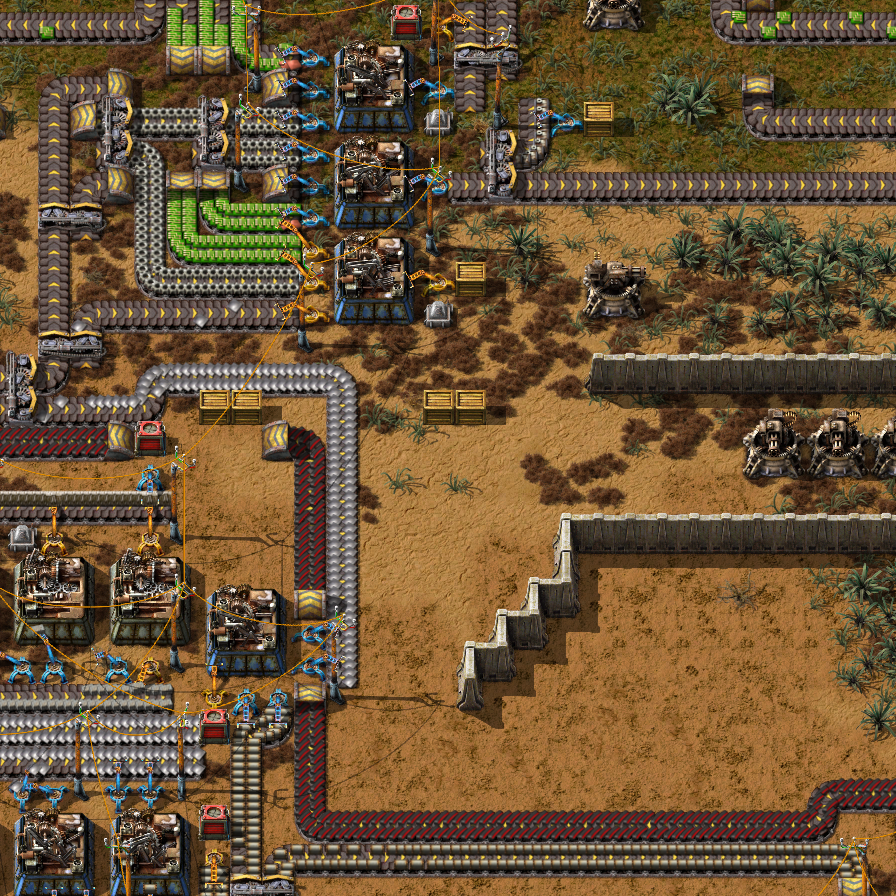 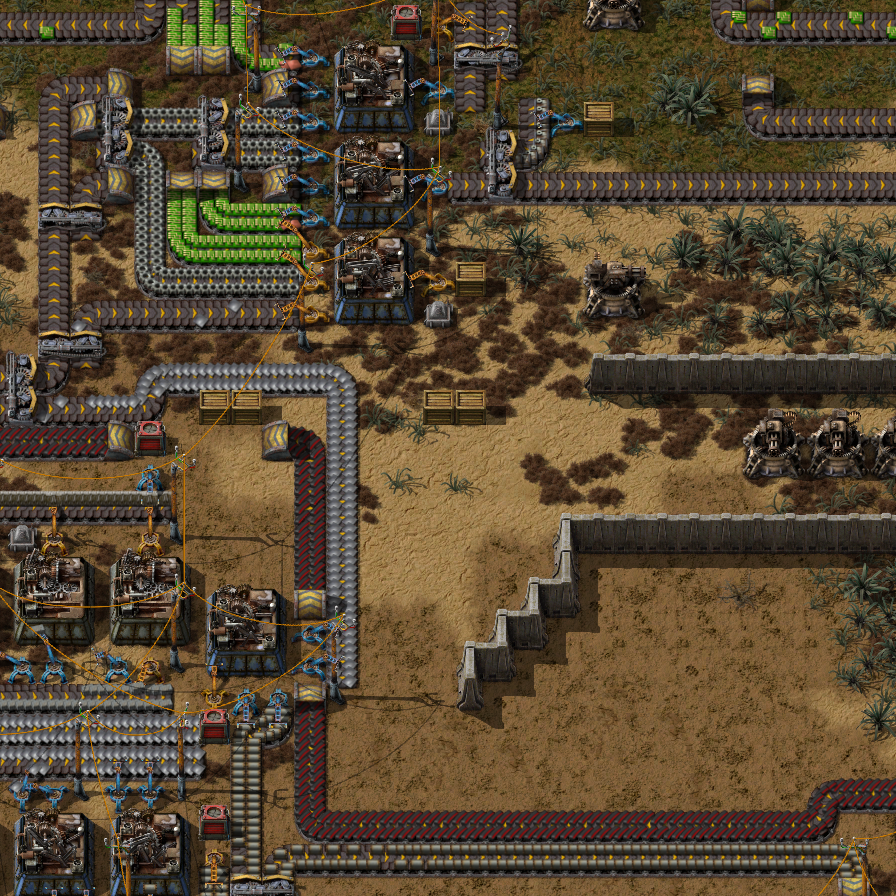 Touching terrain colours means touching map colors also. We were very keen to keep the visibility of the map information and the similarity with the terrain. The result is a more vibrant look in the entire game. 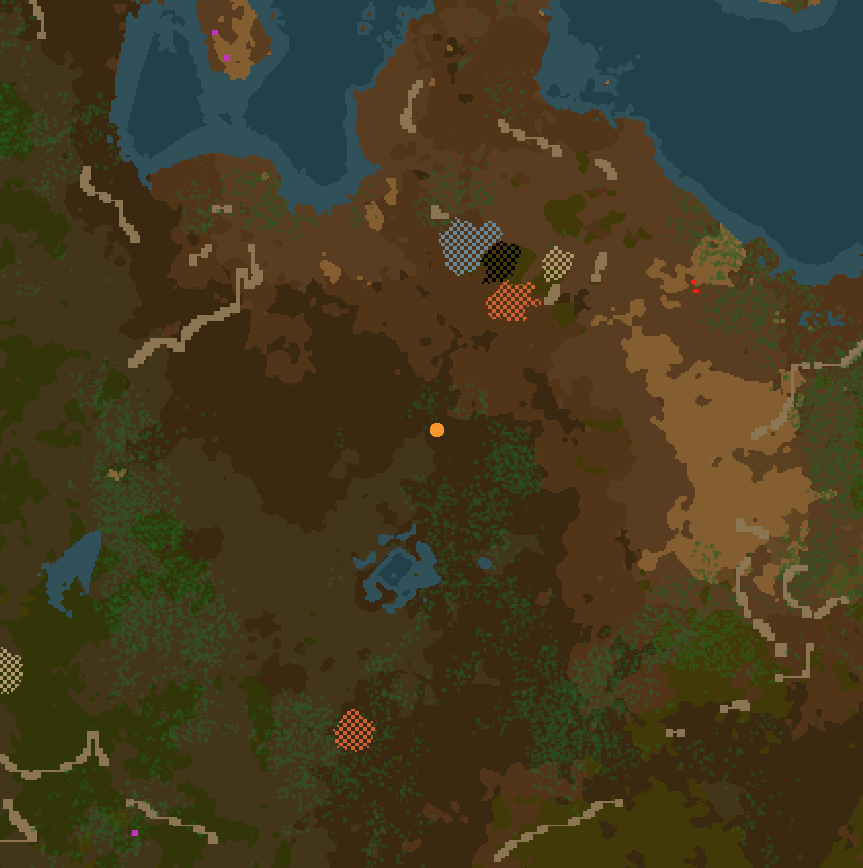 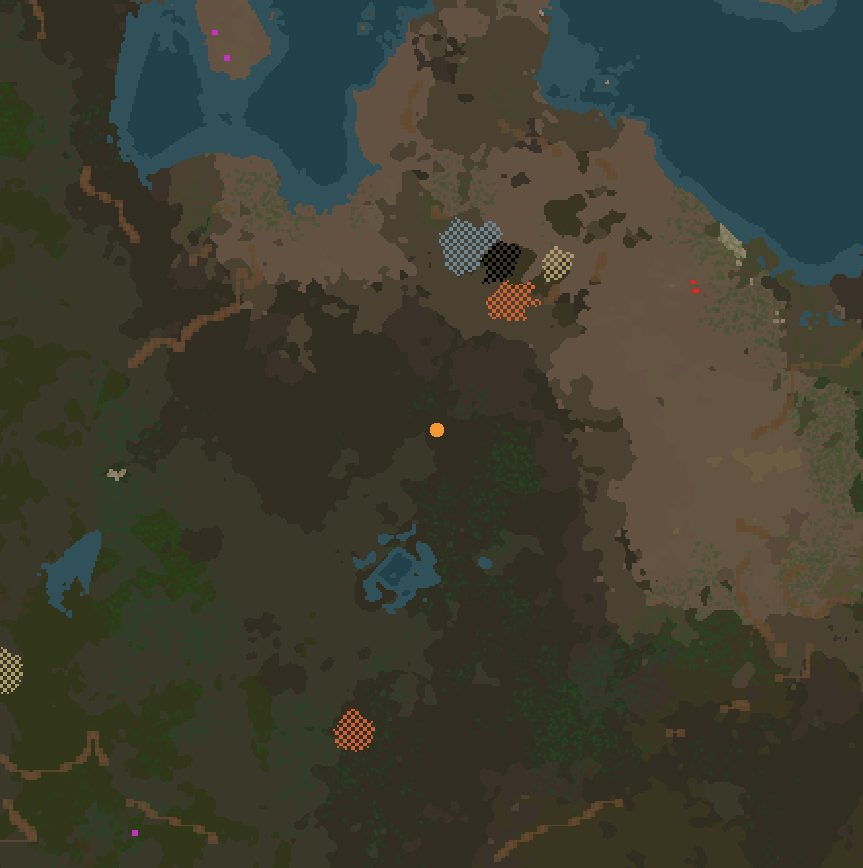 We tweaked the night also. Thanks to posila and Wheybags, we can use LUTs (Look up tables) to dynamically modify the colors. Instead of playing with the alpha channel of a solid black layer on top of the game. Now we can gradually move to a different color palette for night with more control. So the colors are losing their saturation and becoming more blue and cold. This is important, because part of the annoying darkness of the game comes from this black layer. 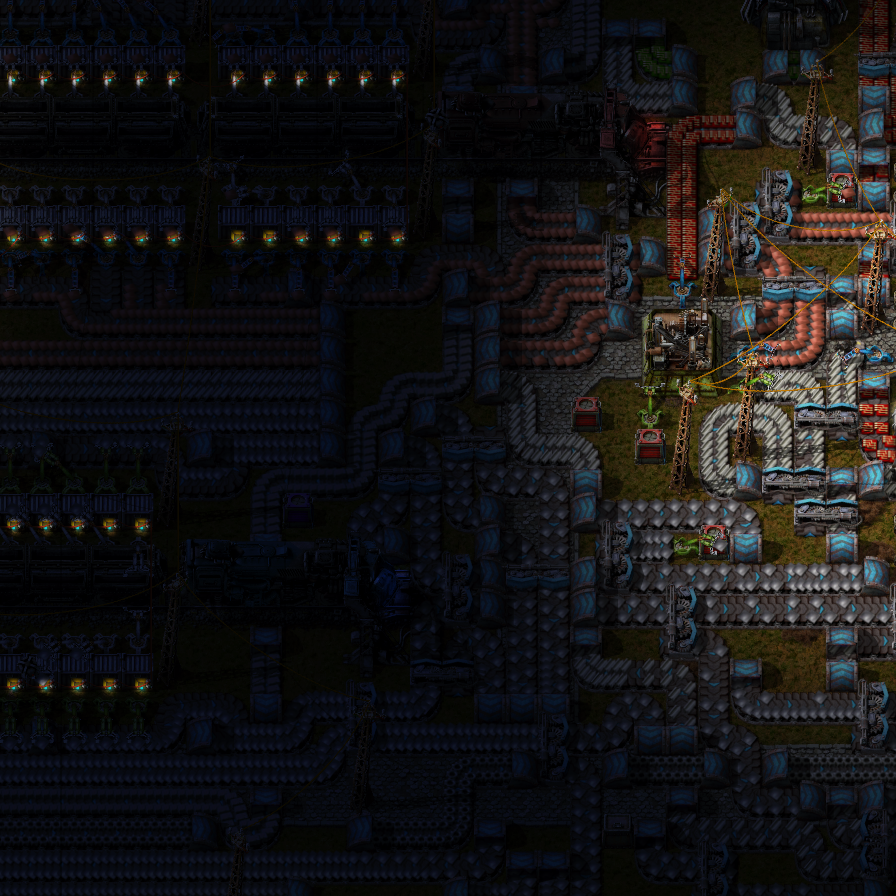 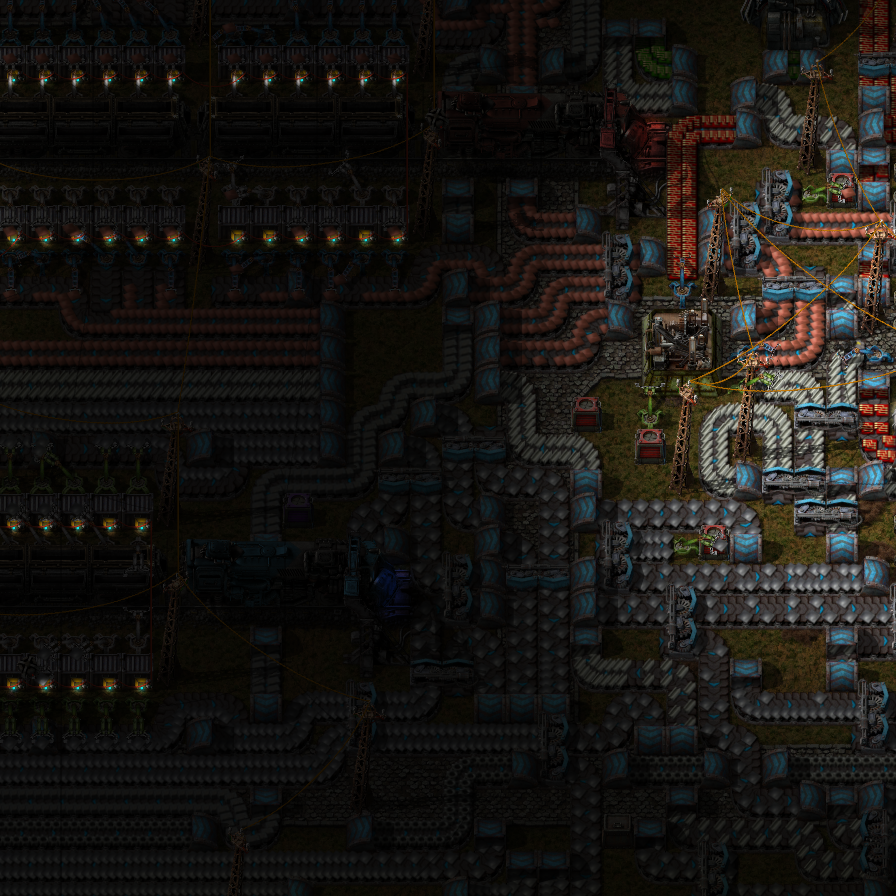 We are still experimenting with this LUT, and the transitions of day/night cycles. I'm pretty sure also that I will have to touch the map colors for some missing details and fine tuning. Possibly there is some entity that is not in its best shape with these new color palettes, and maybe we keep tweaking the terrain. But I feel very confident with these additions and I'm very sure that these changes will improve the experience of playing Factorio. After playing with these colors, the feeling is good. I hope you see it the same way.

By changing the colors of all game graphics, most mods are going to look out of place. We’ve used scripts to apply LUTs to most of the images, and one such script is ready for mod authors to clone or download here, together with the information of which LUT was used for which spritesheet in the game data, with the exception of terrain tiles, electric wires and combinators which were adjusted manually.

For technical support don’t hesitate to contact me directly, you’ll get quickest reply by messaging me (V453000#1894) on the Factorio Discord.

We still have some work to do on the LUTs, so they aren't going to be ready for release for another short while.