As for the conclusion of the topic opened in the FFF-288 we finally decided to go for a balanced solution in which the player can recognize what entity was destroyed and also walk through them. The solution of going up in the Z-axis is really attractive for designing the destroyed models, but it gives a lot of headaches to the game designers due its need of a bounding box.

We are planning also a generic set of remnants for the modders who don’t feel like making the destroyed version of their own machines. Here an example of how a factory can look after a biter attack: 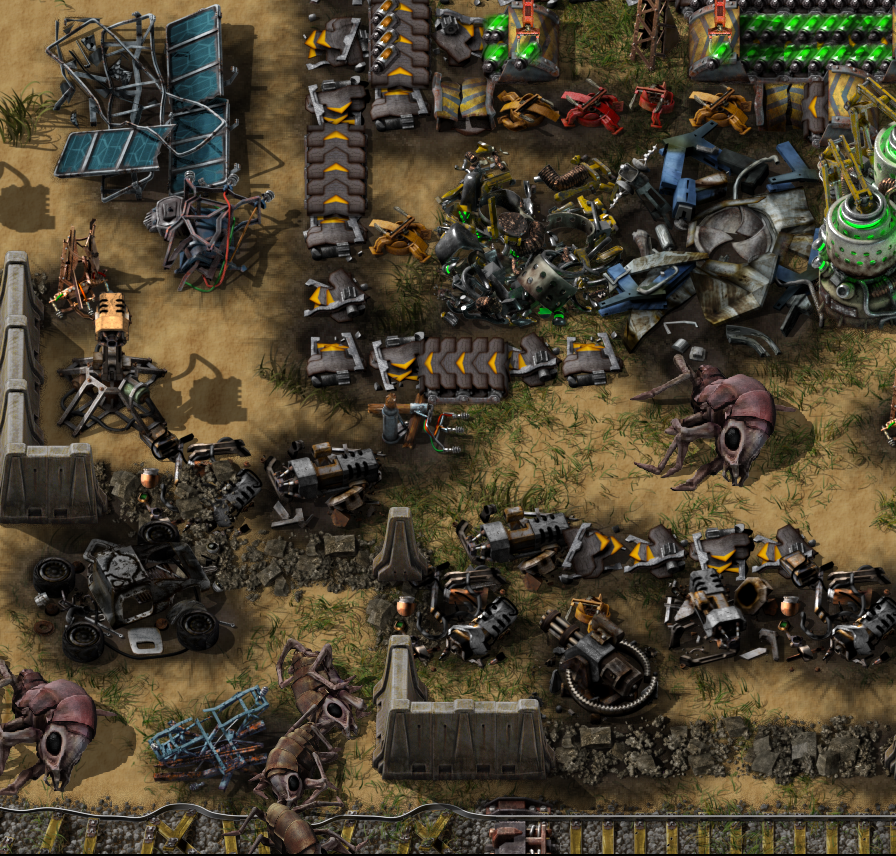 These remnants are still a work in progress, many of them are not yet finished and we are planning more iterations with this subject. By now you'll find a sneak peek in today's release (0.17.36).

The 1.0 will be a one time opportunity to drive the sales of Factorio, and as with the steam release, we don't want to leave its potential untapped.

I want to call myself a "Idealist Capitalist". This means, that I truly believe in capitalism as long as it is done in a fair way. I want to do as much as I can, to give good credit to capitalism by doing the right things myself.

The famous quote of "Do unto others as you would have them do unto you" and also "No bullshit policy" is something we take very seriously all the time during the development since the early days. Things like pricing $30 instead of $29.99, no sales, no micro-transactions, game stability over features, no selling-out to big companies that would use the game as cash grab while destroying the brand (we actually declined to negotiate "investment opportunities" like this several times already, no matter what the price would be), the same would be when it would potentially come to any exclusivity deals, which is its own subject...

We should also be true to this when it comes to marketing. In my eyes, there are good and bad aspects of marketing.

What I truly hate is banners and forced ad-videos, or radio spots that are just screaming at me and trying to get into my head without my consent. The idea, that I would basically pay for the ad that annoys me by buying the product feels deeply humiliating. So you can understand, that I don't want to pay marketing companies to do this to others.

On the other hand, there are a lot of marketing strategies that I'm okay with. I'm okay with media covering a commercial product, as long as I find it interesting. It is a very subjective definition, but it basically means, that it is not about pushing a product into your face, but offering you something that might give you some value even if you never buy that product. Articles about stories of companies, interviews with book/film/game creators are often very interesting, and piqued my interest in products many times before.

There are a lot of interesting themes that could be covered about Factorio, its creation story, its mindset of automation and conscious self-observation of what is the biggest time-stealing thing, the programming/engineering parallels and stories of people who consider their career path because of it. It also has a potential appeal to the big crowd of gamers from the past, who think that games are just mindless shooters with lootboxes these days.

This is the kind of content that I would be interested to read about the game if I didn't know about Factorio, and this would be the best advertising for us. So our goal would be to convince as many related media as we can to write about us when the time comes.

I'm talking about the kind of media that covers content related to the themes that Factorio tickles. So anything related to games, technical stuff, engineering, software development, teaching, networking, business, etc. And here comes the moment where I'm turning to you. You could give us pointers, what kind of magazines do you read that could be suitable? Let us know. Do you know anyone related to a media outlet that could cover us? Let us know. Do you have other ideas of what could we do for the release that is still true to our principles? We would like to know.

Another way is to make an interesting story that spreads itself, these are the examples:

Breaking all the mods Klonan

We released version 0.17.35 yesterday, and it included a change that broke a lot of mods: Renaming the entity player to character.

Inside of the game engine, the previous naming scheme was a huge inconsistency, because the terms are generally well defined:

Having the character entity named 'player' led to a massive amount of collective confusion over the years, especially in regards to which methods can be called on the LuaEntity and LuaPlayer objects at runtime.

Ok, so taking a step back, why are we making these breaking changes now? The short answer is that there is no better option for us:

We might make some more mod breaking changes in upcoming experimental releases. We'd like to thank all the mod authors and experimental players for their understanding and patience as we work towards the full game.