Hello,
The year is wrapping up, and we have been hard at work finishing off some topics before we take our Christmas break. As you can imagine, releasing any new version of the game without a few weeks to do bugfixing wouldn't be wise, so you can rest easy this holiday period without the worry of a surprise 0.18 release.

One of the motivations behind the new optimized particle system (FFF-322) was to give our GFX team more flexibility to create special effects in the game, and specifically new explosions, without a major concern for any performance impact.

With the new system as the foundation, we have been working on adding new features into the trigger items and particle trigger effects. One such feature was to have particles spawn a 'tail' behind them. This tail looked good for some particles, but not really for others, so then we added an option to spread that tail out in a natural way. This 'Instant tail' gives the particle effect a more explosive feel, with the particles really bursting out dramatically from the source, rather than in a somewhat comical single-file stream.

Albert spent some time adding new specific explosions for the enemies dying. This is still a work-in-progress, but so far we are happy with the initial results.

A nice feature we added back in 0.17 is the 'damaged_trigger_effect' on all entities. This lets each entity have a customised effect it creates whenever it is damaged. For instance with the biter, we made it create a blood particle hit effect, which gives the player some visual feedback about hurting the poor critter.

Another bit of refinement we can make is setting the effect to 'hit' at a random position inside a specified box. In the case of the Roboport, which is quite a big entity, the effect is very noticeable. We can make the random offset box any size and position we like, it isn't tied to any other property of the entity, so we can precisely tweak the effect.

With these two in place, we can start to get a bit more specific. Dom has been hard at work the last few months creating specialized damaged effects with custom particles for every entity in the game. One example is the stone wall creating stone particles when damaged and when dying.

We can also mix and match the different particles, to better reflect the composition of the entity in the resulting rubble. For instance the rail has a mix of stone, metal rail, and wood particles.

These new effects and explosions are very much work-in-progress, and are already providing a much better feeling to the destruction in the game. Please let us know what you think, and if you have any suggestions to share. We are mindful of potential performance impacts a lot of particles could create (even with the new optimized system), so we are still looking into some even more performant ideas for the most brutal effects.

A Reddit post surprised us yesterday afternoon with the news that Factorio has reached 50,000 reviews on Steam (not including those who purchased the game from our website). 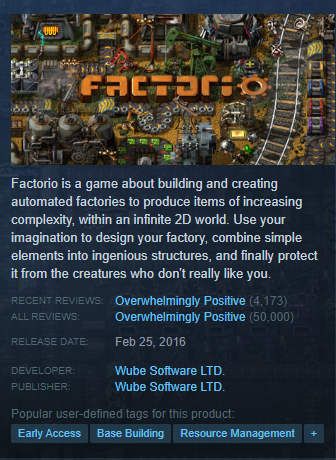 This is an absolutely huge number, and we never had any idea we would reach such a milestone when the game started as a small project just 7 years ago. Many thanks to all those who have reviewed the game.

In regards to other milestones... we might have something else to announce in the weeks to come :) .